Walter Greenwood is, of course, famous as the Salford author of the best remembered thirties depression novel, Love on the Dole, a novel which has had considerable impact, then and since. In fact, he lived for the rest of his life as a professional author, writing new works and adaptations right up until the late 1960s, and publishing four more novels in the thirties and one war-time novel, on which this review will focus, with the slightly un-warlike seeming title, Something in My Heart, in 1944. The story of Something in My Heart opens in 1937 and initially concerns three main characters from Salford: Helen Oakroyd, who works in a textile mill, Harry Watson, and Taffy Lloyd, both of whom are on the dole.  Indeed, as the (unsigned but very striking) dust-wrapper image suggests, this novel is a wartime sequel to Love on the Dole, which has been surprisingly forgotten about. 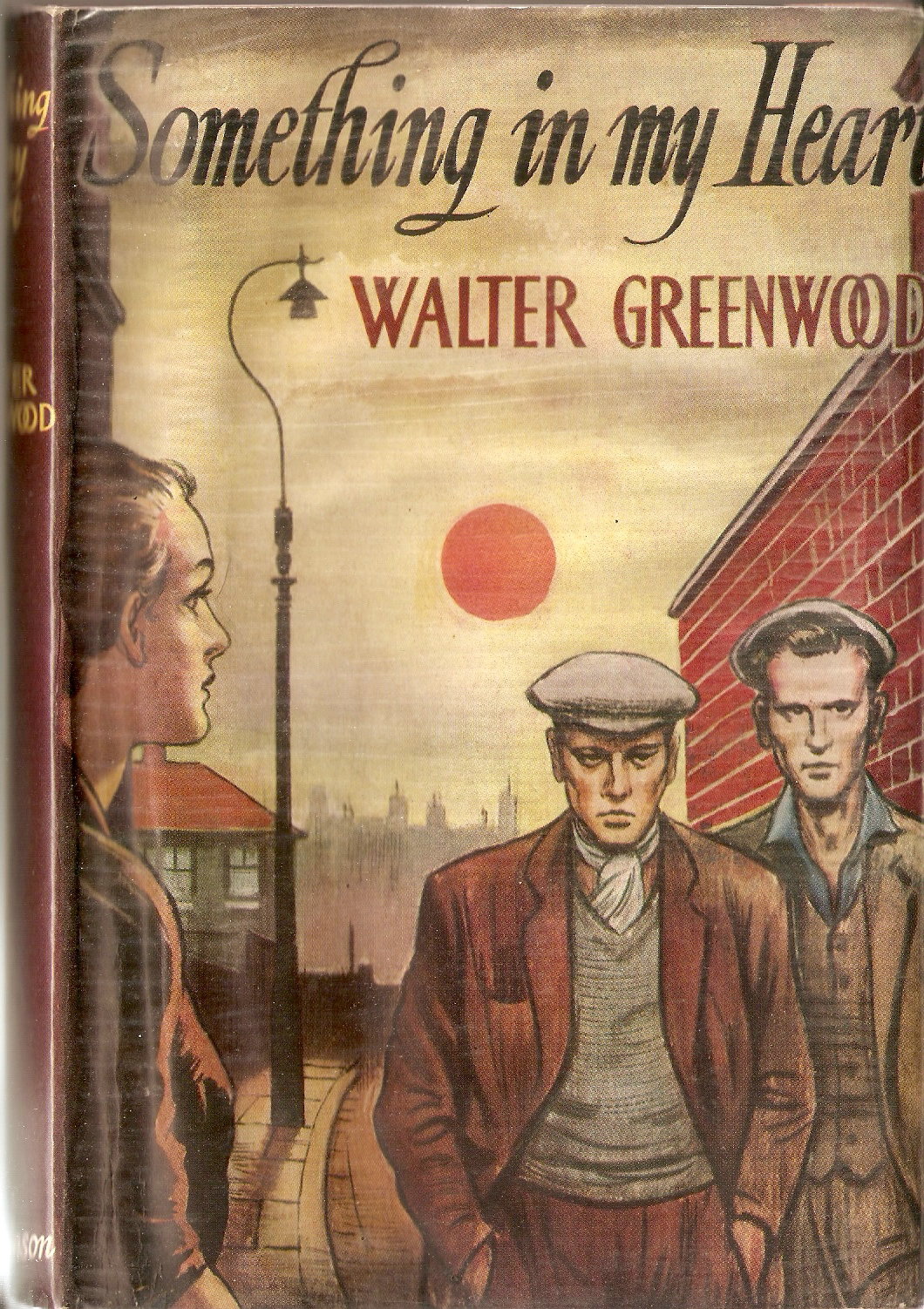 Harry, Helen and Taffy reproduce aspects of the roles of Sally, Harry and Larry in Love on the Dole, as well as re-using two names from that novel (Harry and Helen). Confusingly, however, the Harry here broadly corresponds to Larry, Helen to Sally, and Taffy to Harry Hardcastle. Harry Watson is clearly a self-educated and politically active working man, Taffy is also committed but consciously less articulate than Harry Watson (‘I can’t put it into words like Harry’ p.8: all page references are to the first edition published by Hutchinson), while Helen is a ‘beauty’ on ‘twenty-five bob a week’, who craves romance and feels a thus far unrequited love for Harry, but who, like her predecessor, Sally, is remarkably independent and tough-minded in many respects. The names themselves are, of course, pointing the reader back to Love on the Dole, but so too do many other allusions in the opening chapter. Thus, Taffy thinking about his situation not only echoes Mr Hardcastle’s ‘oh God, gimme a job!’, but also summarises the sense which Love on the Dole gave so strongly of the impossibility of an ordinary life for the unemployed, and the resulting sense of hopelessness:

Blimey! A job! A quid in your pocket and a decent suit of clothes to your back. Aye and married to a girl like Helen. Aw, but chuck it man. How many more mugs are there like you in Britain thinking the same thing? Millions of ’em and all signing on the dole like you and Harry. Most of ‘em like you, too, young, strong and with the best part of their lives supposed to be in front of them. All being robbed of it, robbed of something that could never be replaced. (p.7)

The themes of love and marriage on the dole raised by Taffy are also strongly picked up by the other two characters in the first few pages. Helen thinks about how much she likes Harry Watson, but also shows her independence by asserting that she does not necessarily need a conventional marriage relationship, ‘If ever I fall in love with a fellow, I’ll not ask him for a thing’ (pp. 5-6). She also observes that Harry does not seem to notice her and reprises some of the romance / class dynamic between Sally and Larry in the earlier novel:

When, every Thursday, he was taking his class in economics at the Labour Club, she was among those present. Maybe he did guess how she felt and maybe this avoidance was his unspoken answer. No, no it wasn’t that … He was too interested in his political activities; that was the reason. She found herself hating them and his other studious interests. Yet, it was partly because of these he was so different from the other fellows; this was the quality in him that was the mainspring of her love. (p.6)

In fact, Harry shortly afterwards articulates his own refusal to respond to her as stemming partly from political commitment, and partly from a somewhat retrograde assumption that romance and domestication will inevitably erode the single man’s ‘freedom’ to engage with politics:

You’ll find yourself enmeshed … Instead of waiting for you at the street corner you’ll find her at your house and, maybe, when you feel like studying … Romance? Love? Who’s taking about these things? As well ask a soldier about those things when he’s in the middle of a battle. You’re in the same fix as a soldier – except that no battle can last long … Some of your fellow dole-birds have been out of work for ten years. A dreary, weary, spirit-breaking battle in the concentration camp of empty pockets (p.10)

The comparison of unemployment with military service and, indeed, combat has a particular resonance of course, given that this is a wartime novel. Indeed, the first edition rear dust-jacket makes this very clear, referring to Harry and Taffy as ‘two of that vast army of the unemployed’ who have now joined the RAF. The meaning of unemployment is thus shifted towards something more heroic than the dominant hopelessness represented in Love on the Dole (though that is evoked too by the striking reference to ‘the concentration camp’).

Indeed, though the evocation of Greenwood’s first novel is strong, there are also some notable differences between it and Something in My Heart. Where the 1933 novel often implies that the people of Hanky Park are in many respects trapped in a poverty very like that of the nineteenth-century, this novel suggests both a more modern England and also characters who are not quite so wholly stuck in the system into which they are born. Thus aspects of consumer England and modern leisure seem to be more often referred to, even if they are no longer possible for most of the characters, and there is a greater knowledge of the wider world:

Just look at ‘em, patent leather and pointed toe: the only ones I’ve got left and what I used to go jazzing in. Aw! I’m no blooming Red. I’m an ordinary guy, a skilled mechanic out of a job … But I can fix any blasted, broken-down car or machine with the next man (p.8).

There is also noticeably less use of Salford dialect and a greater use of contemporary idioms – often cinema or popular-fiction derived Americanisms such as ‘dough’. These are unemployed citizens, but citizens nevertheless of England rather than of just Hanky Park (indeed, the fact that Taffy is Welsh widens the picture of unemployment in itself, though this may also be an influence from the 1941 film of Love on the Dole, in which the politically-active Larry is played by the Welsh actor Cliff Evans with a clearly Welsh accent). Though Taffy and Harry are trapped for the moment, there are even some possible ways out. Thus, Harry is, among other things, good at boxing:
Lightweight champion of the Salford Lads’ Club three times running… You could have been British professional champion if you’d wanted and be walking about with a pocketful of dough just for poking somebody in the kisser. Turning the promoter’s dough down like you did (p.9)
However, Harry has ‘other fish to fry’, for he is studying through his union ‘for the Ruskin College scholarship’ (p.9). Both these escape routes, in their different ways, suggest a representation of unemployment in thirties Salford as less isolating than the version depicted in Love on the Dole. Where in the earlier novel Larry seems to be in most respects the only political activist in Hanky Park, an odd exception whose origins and history are not revealed in the novel, and the unemployed youngster Harry Hardcastle has in the end only the street corners to go to, here Harry Watson is part of a society possessing some collective working-class institutions which can help the unemployed: boys’ clubs, a Labour Club (p.6), a union which can fund study, and a national college for working people, to which some can aspire. The local entrapment of Greenwood’s earlier novel is to a degree opened up to a more national and even international culture here. The essentially passive inhabitants of Hanky Park have been succeeded by much more politically-conscious beings; during a political discussion about how Hitler came to power in Germany on the back of unemployment and loss of hope, Harry reminds Taffy of their joint attempts to do something: ‘We’ve collected for the people of China and Spain and the Vienna workers. You were at the meeting for Sacco and Vanzetti’ (p.21). The escape route through professional boxing is, of course, a more traditional one for working-class men.

Overall, then, this seems a slightly more hopeful Salford, even though the mass experience is still one of severe deprivation through joblessness. Another means of escape which is offered as a last resort in Love on the Dole is now seen as a focus of mobility. In a moment of desperation, Harry Hardcastle in Love on the Dole thinks his only course may be to join the army, but both Harry Watson and Taffy Lloyd share an obsession which is, if very marginally, at least contactable for unemployed men from Salford. At the very opening of the novel, Helen sees two ragged men and knows how they have spent their day: ‘they had signed on at the dole late this afternoon and thence had walked to Barton aerodrome to watch those who could afford it take lessons in flying’ (p.5).

Flying was used as a potent symbol for a number of things in the twenties and thirties – including escape, modern mobility, technological mastery of nature, the possibility of individual liberation from mass experience, and, particularly towards the end of the period, as a symbol of Fascist domination. Here it certainly symbolises escape for Harry and Taffy, but is also associated with the modern, with resistance to fascism and with individual and national recovery. Thus in due course the once desperate Taffy comes back to Salford to see Harry, who is still studying to get to Ruskin, having completed his (pre-war) RAF training as an Observer: ‘Taffy Lloyd stood on the doorstep, sunburnt and grinning. A winged “O” was on the breast of his uniform … The same Taffy and yet – what a difference! Bright eyes, straight shoulders, a living air about him’ (p.28). Where the civilian social order has failed him, the RAF has transformed him: ‘I’m telling you … the way they never taught us anything at school…the education in the RAF … those instructors, they really want you to learn’ (p.29). Harry, at the outbreak of war, joins Taffy in the RAF and qualifies as a pilot.
These transformations and modernisations of Love on the Dole are key to this wartime novel’s message (and message does seem the right word). What was a call for help from the forgotten region of Hanky Park is here put into the larger perspective of ‘Act 2’ of the nineteen thirties, the road to war and thence eventually to the hoped for post-war settlement for Britain. This perspective makes Something in My Heart a progressive narrative in several senses, where Love on the Dole is within itself a largely circular one, except for the bitter progress for the Hardcastle family achieved through Sally’s submission to Sam Grundy’s ‘patronage’. What was the identity-sapping nothingness of unemployment is here being written into a history – and a highly critical one – of pre-war government failure to manage this social and economic disaster and, prospectively, of what must replace such failures once the war is won.

(This review draws partly on material  in my article ‘The Army of the Unemployed: Walter Greenwood’s Wartime Novel and the Reconstruction of Britain’, Keywords – A Journal of Cultural Materialism, Vol.10, October 2012 and partly on chapter 3 of my forthcoming book, Walter Greenwood’s Love on the Dole: Novel, Play, Film, Liverpool University Press, 2018  – Chris Hopkins)

View all posts by ambler1