There Was a Time revisits the setting and circumstances of Love on the Dole in a more autobiographical mode from the perspective of the nineteen-sixties. It is perhaps one of his best pieces of writing, and maybe the best in some respects. It was his last published prose work and was written after more than thirty years experience of being a professional writer. In particular, my feeling is that Greenwood had learnt by then to let the events of the narrative seem to speak for themselves (whereas earlier, including in Love on the Dole, he had often felt the need to use narrators who explicitly glossed the narrative events for the reader). A good example is when the Greenwood’s neighbour Mrs Boarder receives the second telegram telling her that her son as well as her husband have been killed in Flanders in 1916, and the text seems only to record her simple understatement: ‘Nay, nay. Not our Harry as well’ (p.116). No commentary could render the loss greater.
Jonathan Cape published the memoir in hardback in 1967 in a striking dust-wrapper with a black / white / red design by Leigh Taylor, who worked on a number of Cape books from the sixties until at least the nineteen-seventies. The cover portrays the periods covered by the book, starting with the nineteenth century on the upper rear cover and then moving round the spine to scenes from the nineteen-thirteen before moving back round to the lower rear cover, which depicted the nineteen-sixties including the TV, the Mini-car and a fashionable young woman in a mini-skirt. Penguin printed a paper-back version in 1969 (with the same cover design), which sold well. 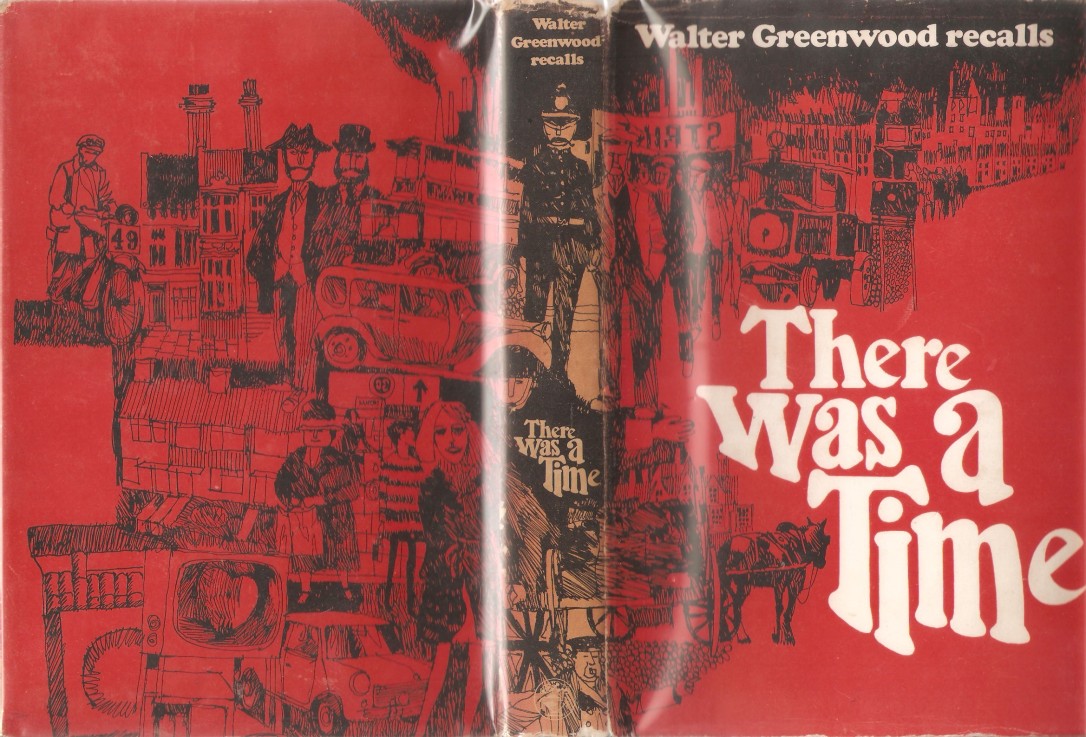 The book is made up of forty-five concise chapters, each portraying a specific and memorable scene from Greenwood’s life between the 1900s and the publication of his first novel, Love on the Dole, in 1933 (the only part of his life covered after 1933 is in the concluding chapter, which looks back on his experiences, on Salford, and on British society from the perspective of 1966). The authorial voice is a modest and dead-pan one, recounting incidents vividly, but usually without drawing out any explicit judgements about their meaning. Much of the memoir at first emphasises Greenwood’s memories of his father, mother, grandparents, and neighbours, especially women. His father, a barber, is portrayed as an extrovert who enjoys a drink: ‘the company of his fellow men was imperative to his ebullient nature, and this need urged him … into any one of the pubs which were [then] open from five-thirty of a morning until eleven at night’ (p. 14 – all page references are to the 1967 Cape edition). Greenwood’s mother, though attracted in many respects by her husband’s gaiety, also often disapproves of his behaviour and urges him to think about the future rather than about immediate pleasure. He tries to convince her that ‘his visits to the pub were “for the sake of business” ’ (p.15), but she often suspects him of risking being ‘low-bred and undignified’, as when he tells risqué comic tales while cutting his male customers’ hair (though she could sometimes nevertheless be heard laughing in the back-room).

Greenwood writes of his father and mother (and their conflicts) with great affection, while leaving the reader to make up their own minds about whether his mother’s preference for longer term planning or his father’s addiction to spontaneous enjoyment is the more provident given their situation. Certainly, his mother sets high standards for Walter, not letting him go out to play in the street till he has correctly recited the current poem she has set him (‘And before you go off gallivanting have you learned the Wordsworth poem?’ – p. 80). Though there is characteristically no explicit comment, the memoir at times suggests ironic and/or comic contrasts between his mother’s cultural standards and the actual conditions in which they live. Thus, after his mother tells him he must do his piano practice and quotes the Old Testament to him (‘Train up a child the way he should go; and when he is old he will not depart from it’ – ‘Proverbs’ XXII, 6), Walter goes out to join his peers and finds them ‘engaged in a game of kick-can’, while: ‘Hetty Boarder .. had lifted her fraying skirt and was dancing the can-can to the music of Billy Sealey’s accordion. Alfie supplied the rhythm with a couple of pairs of rib-bones while Nobby did his best with a Jew’s harp’. (p. 111). Greenwood knew his Shakespeare well and it is hard not to believe that he has the cultural contrast between high and low suggested by A Midsummer Night’s Dream’s mechanicals partly in mind here (the bones are Bottom’s preferred instrument, and Greenwood had explicitly used the idea as a key topic in his play Too Clever for Love, 1952, in which a working-class drama group put on Shakespeare’s play). However, the memoir despises neither low nor high, but sees values in both – showing perhaps more certainty about this than Love on the Dole’s ambivalences about the most popular past-times of Hanky Park (such as betting and drinking).

Sadly, by chapter 12 (p. 77), Greenwood’s father has died young, at the age of forty-five (his health probably affected both by drink and damage to his lungs from the industrial pollution of Salford’s factories and mills). Greenwood observes that ‘as was the case with almost every other man in the locality, my father left this world in the state in which he had entered it – penniless’ (pp.67-8). Greenwood’s mother had to return to work as a waitress at a restaurant in the day-time and for contract caterers in the evenings, in order to keep Walter and his younger sister. His mother usually finished work after midnight; Greenwood looked after his sister and put her and himself to bed, but had to let his mother in when she returned: he tied a string round his ankle so she could wake him up (‘the window string was, literally, a leg pull’, p. 72). Aged thirteen, Greenwood reluctantly but necessarily found a job as a boy clerk at a pawnbrokers, where he worked both before and after school hours. The year was 1916 (the memoir differs from Love on the Dole in explicitly devoting much more time to the First World War and its consequences). Walter left school the same year: he took a special test (‘the Labour Examination’) designed to enable the sons of deceased fathers to leave school a year early to help their families, if they could show they had ‘enough’ education. He went to work at the pawnshop full-time – an experience he detested: ‘Weekdays were bad enough, but to be imprisoned in the pawnshop until nine o’clock of Saturday night was excruciating’ (p.89). Even worse, he is left as the sole clerk in the shop after his fellow assistant, the seventeen year-old Reggie Sniblo, successfully lies his way into the army. Luckily, he is rescued ‘by an insect’ (p.108), that is body lice caught from infested clothing – probably originating from soldiers on leave from the trenches. His mother finds him a much better job as an office boy in the Co-op office at three times the wages.

Though undoubtedly an improvement, Greenwood was by no means happy with this position and craved a ‘proper’ man’s job in industry – on the railways or in engineering. However, his mother was opposed, reminding him of the ever-present possibilities of short-time and lockouts. Greenwood also had another more pastoral dream of an alternative to the Co-Op – indeed he was reprimanded for drawing horses on the accounts ledger – and without consulting his mother this time he got a job at a racing stables owned by a business-man in the Lancashire countryside, despite knowing nothing first-hand about horses. As Walter finds out, this is in fact a very tough life, but he learns on the job and though the chapter title (‘Holidays with Pay’) is partly ironic it is not wholly so. However, this escape from industry is temporary – for as in Love on the Dole, every part of the economy proves to be connected – ‘the north-country speculator was in financial difficulties and … his string of race-horses had to be sold’ (p. 157). Greenwood returns to various clerical and manual jobs, none of which last long, and by 1929 he is unemployed and on the dole. But he has formulated a clear ambition which is aided by taking home the office type-writer from his last job (in lieu of unpaid wages). He will become a writer and make a living from short stories.

His first and only success was when the first story he ever wrote (‘A Maker of Books’ – a story about betting) was accepted by the very reputable The Story-Teller Magazine in 1931. To its author and his family’s amazement, the fee was twenty-five guineas – enough for him to live on for a considerable period – ‘a pound a week for half a year’ (p.215). The story was republished in 1937 as the first story in his short story collection The Cleft Stick, for which it was probably the starting point (published by Selwyn & Blount with sixteen fine illustrations by the Christian socialist pacifist artist Arthur Wragg). After that, he had no further luck with short stories and magazine publication. Editors did not think the social critiques of his stories suited their markets – they were ‘not the sort of thing to interest readers who paid their money for romance, entertainment and excitement. If I cared to send something of a lighter nature, [they] would be happy to read it’ (p.216). But Greenwood felt he had to tell the story behind the Ministry of Labour statistics, a story of ‘human degradation and misery’ about which he felt ‘the newspaper chronicles were silent’ (p. 217). At the age of thirty-one, Greenwood felt that, like nearly two million others who were unemployed, he had little to hope for – except that work on his novel held him ‘in thrall’ (p.246). In 1933 Greenwood received a letter from the publisher Jonathan Cape which the memoir claims said simply, ‘Dear Sir, we will publish your novel’ (p.249). That letter changed Greenwood’s life and made him into a best-selling author. Together with Greenwood’s own story-telling talents and powers of social analysis, Jonathan Cape’s recognition of the importance and potential of the typescript he had been sent by an unknown working-class writer in the end contributed to enormous social changes and improvements for millions of British people.

Greenwood’s memoir skips over the rest of his forty-year career as a professional writer (though that is a gap which this web-site aims to fill) and ends with a single short chapter of reflection on those social changes. He watches his birth-place in Ellor Street and the rest of Hanky Park being demolished to make way for new tower-blocks:

Where the wreckers have finished their work only the cobbled roadways and pavements remain to mark the streets which were our childhood playgrounds and where our homes had stood. They were built when the British Empire was at the pinnacle of its wealth and power, and they had sheltered defrauded generations for whom life had been an endless struggle both insulting and deprived… Yesterday the Depression and lo! By a hop, skip and a jump the Space Age and the Welfare State. A five-day, forty-hour week, holidays with pay, superannuation pension schemes, lunch vouchers and works’ canteens. (pp.250-1).

Is the memoir sure that the bad times of old England can never be so bad again? Not quite. The last chapter is called ‘The Man at Uncle’s’ and a pawnbroker has the last words of the book: ‘Those three brass balls are staying up where they are. I’m no pessimist, but I don’t like the look of it’ (p. 253).

(This article partly draws on material in chapter 3 of my book, Walter Greenwood’s Love on the Dole: Novel, Play, Film, Liverpool University Press, 2018)