Well, to be precise, these were new in 1971, but they are not anywhere recorded, so they are also still new, or new discoveries. In April 1971, Greenwood’s friend and colleague, Bernard Miles, produced the first London performance of the stage-version of Greenwood’s memoir, There Was a Time (published in 1967). It had already had a premiere at Dundee Repertory Theatre, under the title, There Was a Time, but for the Mermaid production Greenwood/Miles changed the title to Hanky Park. They also produced a particularly rich and substantial programme, which had eleven pages of material about Salford in the thirties and about Greenwood’s life. This material included sixteen photographs, several quotations from Love on the Dole and There Was a Time, and three autobiographical pieces which Greenwood seems to have written specially for the programme, as well as a recent photograph of the author and a brief life which gives a good overview of his career.

For more about his life and career, see: Walter Greenwood: a Biography

The first autobiographical piece is a very short introduction to Salford, paying it several back-handed compliments about some important and progressive achievements in which it took unacknowledged precedence over other cities. The approach is quite like that in Greenwood’s 1951 topographical book, Lancashire. 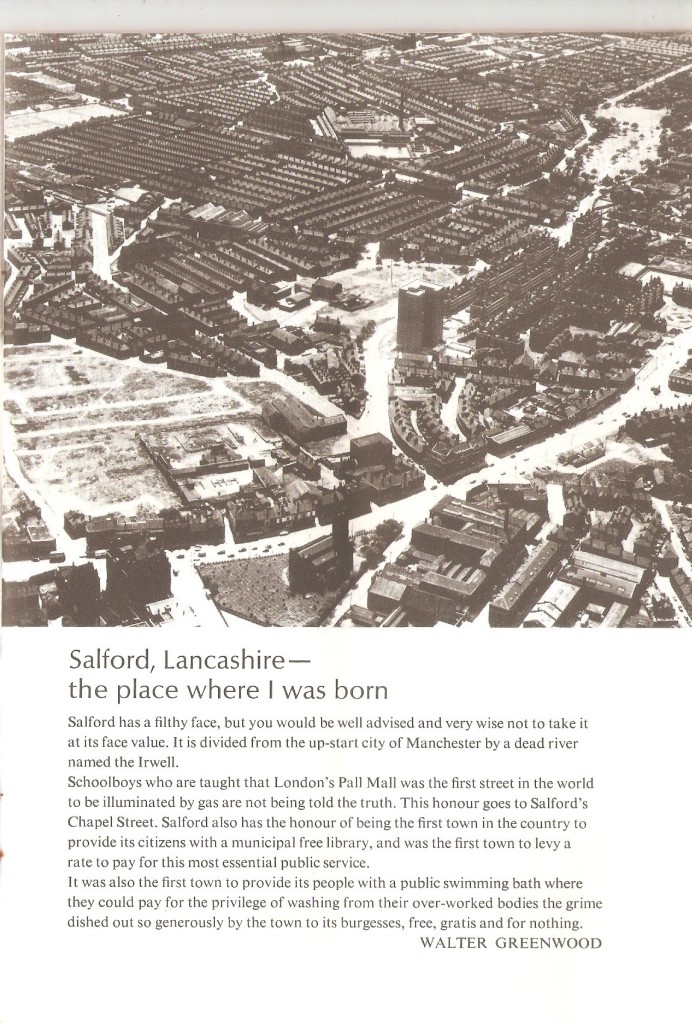 The second of the autobiographical pieces captures the fine qualities of his mother, Elizabeth Greenwood, underneath a photograph of her which Greenwood must have provided. It characterises her as optimistic and as loving things which provided an alternative vision (and possible future to) the actuality of Hanky Park. There is a matching photograph of Walter’s father, Tom Greenwood, but with his character described using a quotation from There Was a Time. He is seen as a more extrovert figure. They were both, of course, ‘characters’ in the play. 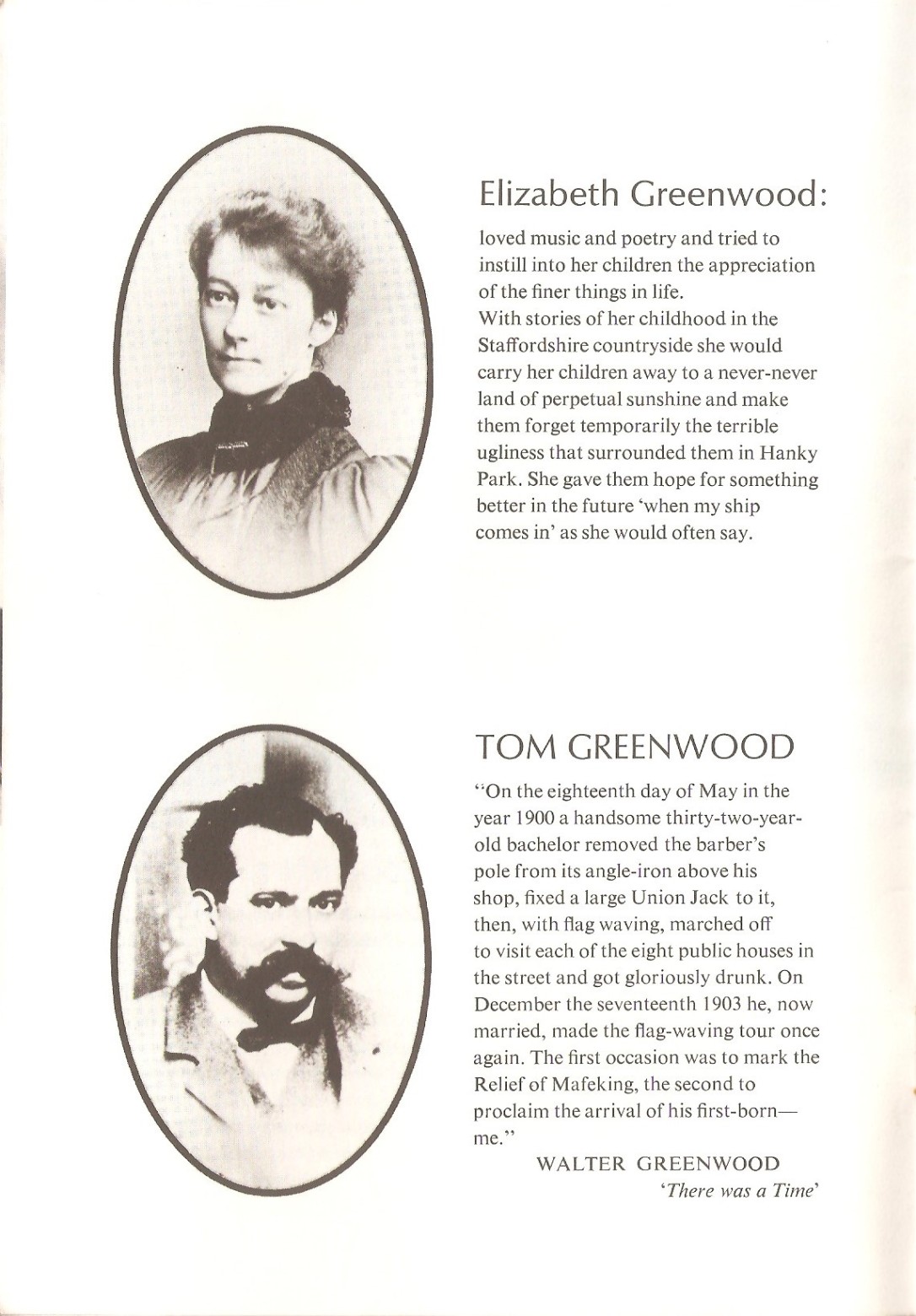 The third autobiographical piece is the longest, filling most of a page, and also the one which tells the story of something in Greenwood’s life which he tells nowhere else. It is a reminiscence of a repeated and collective childhood experience for Greenwood – a seasonal expedition to Pendlebury. According to Wikipedia, Pendlebury is 3.4 miles from Salford, so it was a longish outing there and back on foot for small children (the complete independence from any adult supervision from a young age is taken for granted by all involved). The piece resembles the overall approach to the past of There Was a Time in making a claim to a basis in facts, in having a satisfying story-shape, and in letting that story speak for itself, with a minimum of commentary. It also recalls some of Greenwood’s short stories about childhood, such as ‘Mutineer’ and ‘The Little Zoologists’ (see Walter Greenwood’s Short Stories). It is a relatively rosy recollection of Salford, giving a sense of a rich experience open to even these poor children, though of course it recounts only the immediate experience of the children – and they know no other life. 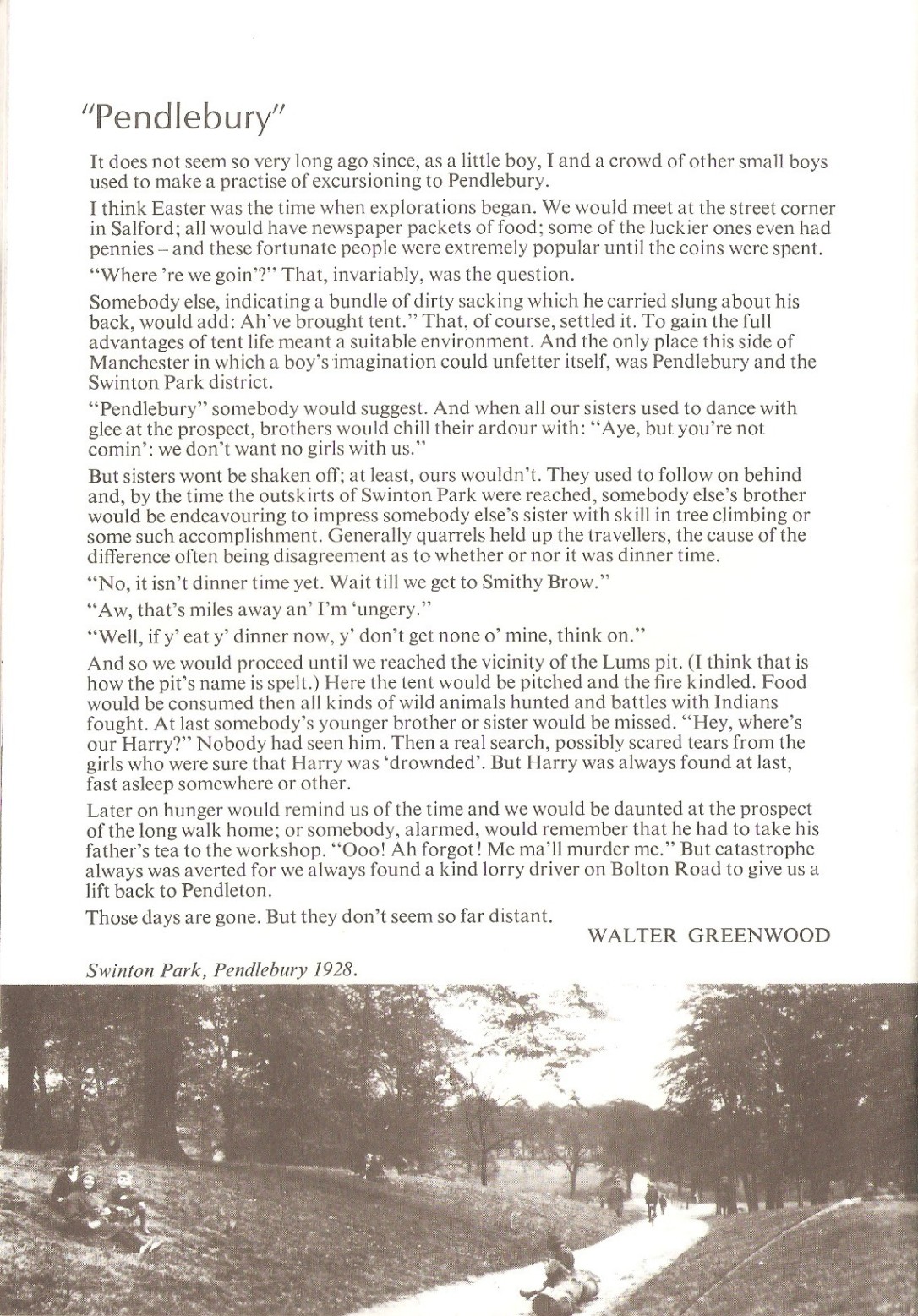