Recently, while doing some work on the actors who created the roles in the first productions of the play of Love on the Dole between 1934 and 1937, I was delighted to discover that there was a nineteen-thirties cigarette card which was related to Greenwood’s (and Gow’s) work (to contextualise my delight see Love on the Dole: the Cigarette Card). It was not a piece of cultural history evidence which a search for either Love on the Dole or Walter Greenwood would have brought up, however. I was searching for thirties images of the actress Wendy Hiller, who first acted the part of Sally Hardcastle with the Manchester Repertory Company in 1934, then continued in the same role in the Garrick Theatre production in London in 1935, before appearing in the Broadway production in 1936 (at the Shubert Theatre). The role made her a star, and she then went on, of course, to a varied, full and distinguished career on stage, film and television which endured for nearly sixty years. Acting in the play also had a significant impact on her personal life, since she met and married (in 1937) Greenwood’s co-writer, the playwright Ronald Gow. It was a search for Wendy Hiller which returned a result on eBay UK of a cigarette card titled ‘Wendy Hiller’. As soon as I saw the image, I knew that the picture-side of the cigarette card was a photograph of Wendy Hiller in the 1934/1935 production of Love on the Dole (the card is 2 3/4 x 1 1/2 inches in size).

This is the distinctive set of a stage rock from Act II, Scene 2, which the Cape edition of the play (1935) titled ‘(Worship in the High Places) On the Moors’. It is the only scene of the play set outside the urban environment of Hanky Park, and it shows Sally and Larry escaping from Salford and spending the whole day together while taking part in a Labour Club ramble. It shows the climax of their happiness together, but alas towards the end of the scene Larry has to reveal that he has been laid off from his job and that they will have to postpone their plans to marry. Sally is wearing shorts, long socks and stout shoes to go on this outing with Larry – it is her new hiking outfit, bought for her by her brother Harry with his winnings from the bookie, Sam Grundy, so that she will fit in with the other (better-off) Labour Club walkers. The shorts are a relatively minor motif in Greenwood’s novel, being mentioned just once (p.96 Penguin edition) as Sally imagines how well they will suit her next time she goes rambling with Larry. The play however, made more of them, as a source of comedy, as a sign of Sally’s determined independence, and as an aspect of her sexuality. In the play, Sally contrasts Harry need for long trousers with her own wish for shorts, there is some byplay between Sally and Larry about whether shorts will suit her, and a conversation between Sally and her mother about whether wearing shorts is respectable (Cape edition, pp.17, 27, 32). The cigarette card (following a number of photographs accompanying reviews of the play) clearly sees a woman wearing shorts as having what might at the time have been termed ‘sex appeal’. Indeed, despite my pleasure at finding this cigarette card (which seems to be quite rare) I cannot really approve of the title of the series which is called ‘Girls From the Shows’ and featured actresses in currently successful stage shows.  ‘Our Leading Actresses’ would have taken these actresses’ work more seriously.  The card was in a set of forty-eight cards issued with ‘Chairman Juniors’ cigarettes by the tobacco company R.J. Lea Ltd of Stockport. The set dates from 1935 and though some knowledge of the play is needed to link the image to Love on the Dole, there is at least a reference to the play on the text-side of the card. 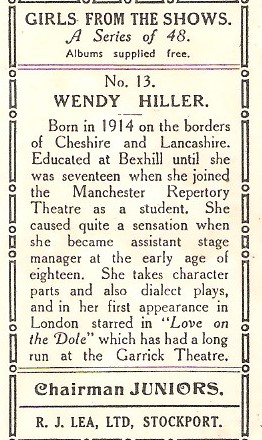 There are other photographs in newspapers and in the Samuel French acting editions of the play of this outdoor scene from the play (the British edition shows just the rock, facing p.41, while the US edition shows Sally and Larry embracing on the rock, facing p.64), but I think this was a photograph taken specially for the cigarette card since it shows Sally alone on the rock, which does not happen in the play. I think that Wendy Hiller’s hair was specially made to look slightly wind-blown for this outdoor scene, since other photographs of her in the production show her hair looking tidier. This cigarette card is in one way a tiny piece of ephemera, but in another it is another piece to add to the rich cultural history of Love on the Dole.

Addendum. I have now seen the remainder of this cigarette card set and this does give something of a context. The main criterion for inclusion in ‘Girls from the Shows’ does indeed seem to be that the actress is wearing shorts or a bathing costume.  There are a few  cards where this is not the case, but these are in a minority. This card may be the one piece of material relating to Love on the Dole  which makes not even a gesture towards social conscience or concern! See below to get the tone of the set. 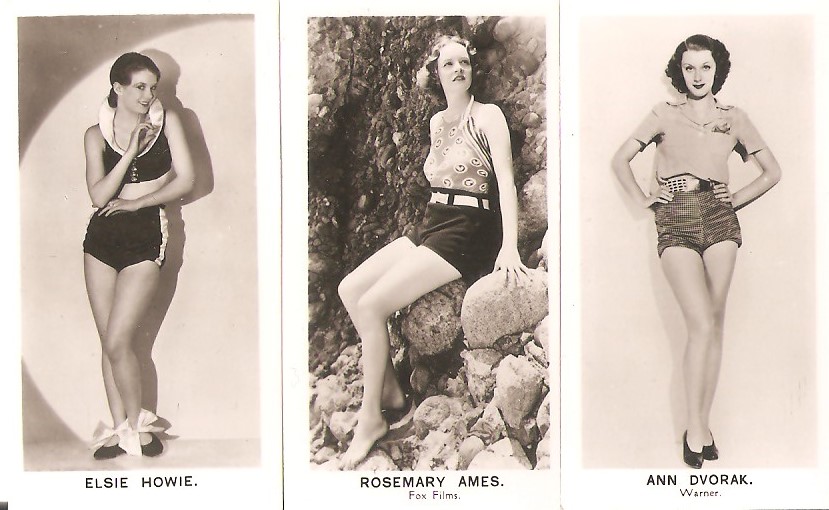