I recently bought on e-bay a first edition of the Jonathan Cape edition of the play of Love on the Dole from 1935, with what the seller described as a ‘DIY dust-wrapper’. This presumably replaced the original Cape dust-wrapper for the play (which had no image, but only lettering) after it fell apart from frequent handling (sadly the fate of my copy’s dust-wrapper too). Unless, the new dust-wrapper was a conscious artistic enhancement. It, of course, immediately appealed to me as a Greenwood curiosity, but it also seemed worth recording as a memento of someone, somewhere, who really cared about their copy of the play-text. This is the creative product of that care. 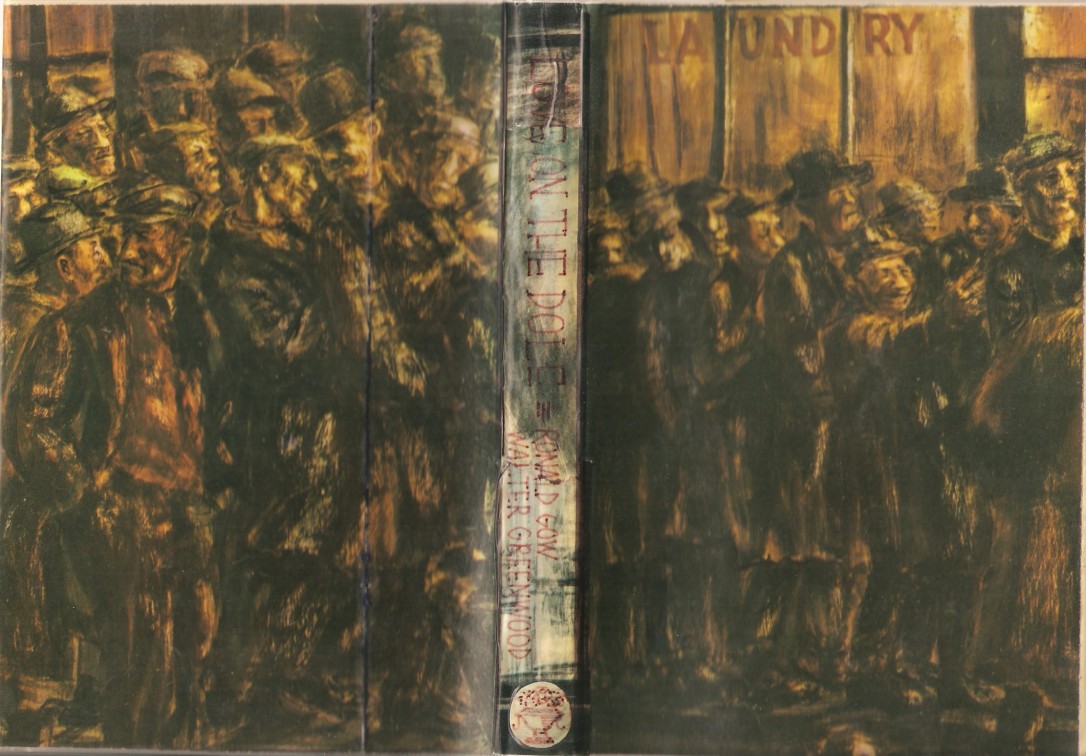 The printed colour-image, the origins of which I’ve not identified, seems carefully selected to be appropriate. The mainly cloth-capped figures (there is one bowler and one trilby) look like none-too prosperous working-men, captured in sombre black and yellow tones, with a little red in the ‘Laundry’ sign. The line of men, some chatting, some more unhappy-looking, does suggest a dole-queue from the nineteen-thirties. The laundry itself seems slightly less appropriate to the play, because in the world of Hanky Park, while individual and oppressed women such as Mrs Cranford take in laundry to earn much-needed money, it is not something done as an established business (who could afford it?). The spine has carefully been painted, I think, to match the image, and the play-title and authors’ names (Gow and Greenwood) have been added in red ink. Perhaps even more remarkably, Jonathan Cape’s vase and flowers emblem has been drawn, also in red ink, on a separate oval of paper and glued to the spine. In addition, the inner flaps of the dust-wrapper have also been given some appropriate attention. In the front flap are pasted two images, I think cut from newspapers, of the Jarrow March of October 1936. (1). On the rear flap is pasted a photograph of Walter Greenwood with a brief caption about Love on the Dole. I know  the source for this – image and caption are cut from the rear inside flap of the hardback edition of Greenwood’s memoir, There Was a Time (Cape 1967), which the play-book owner presumably therefore also possessed. 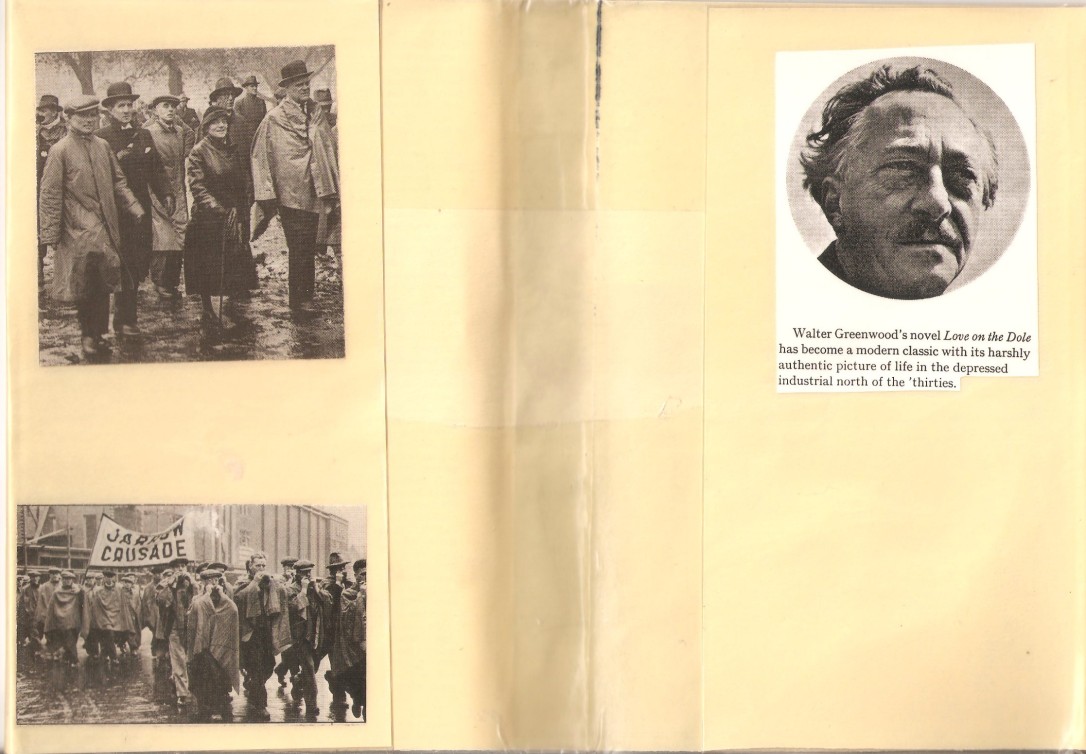 It looks as if this copy of the play has been used for production purposes, since there is a set-diagram drawn in pencil on the blank page facing the opening stage-direction of the play. 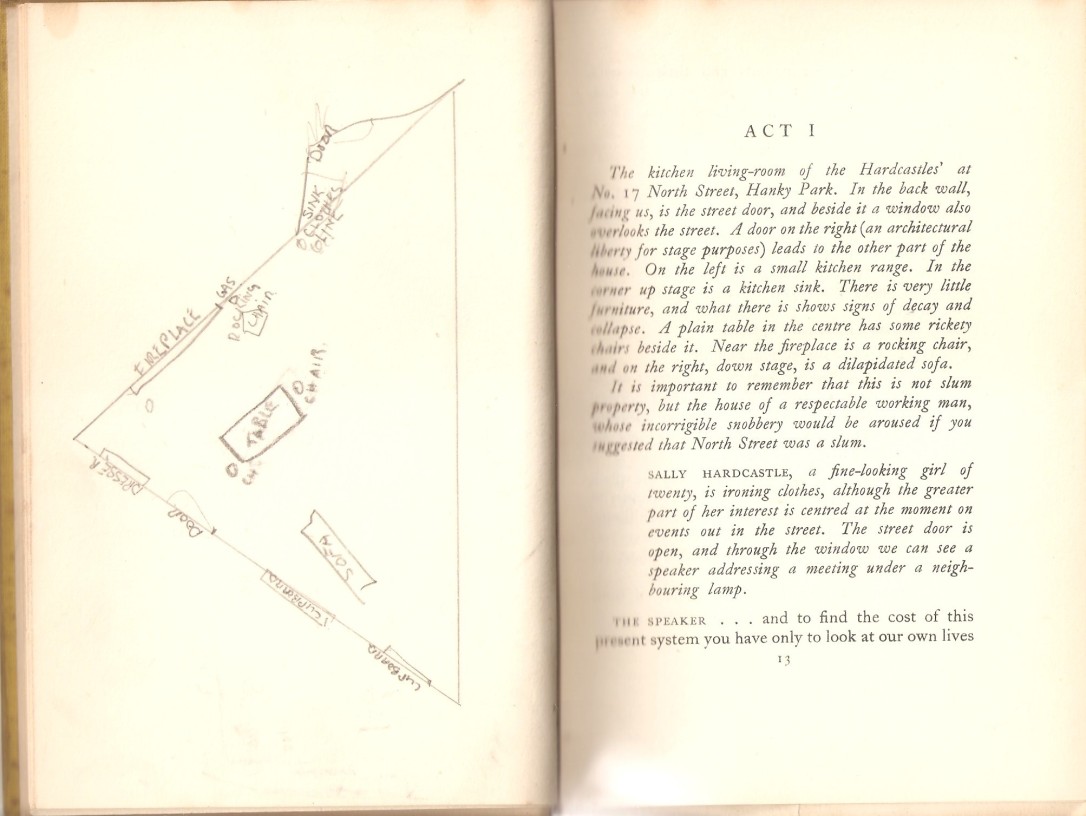 Was it an amateur production or a professional one? Impossible to say. When was the home-made dust-wrapper made? Also difficult to say, but the photo of Greenwood must mean the dust-wrapper was made in or after 1967. Anyway, whenever it was made, someone went to considerable trouble and creative effort – because they thought the play and the play-script was valuable. I am pleased to record that respect for Greenwood’s work and for the people he wrote about.